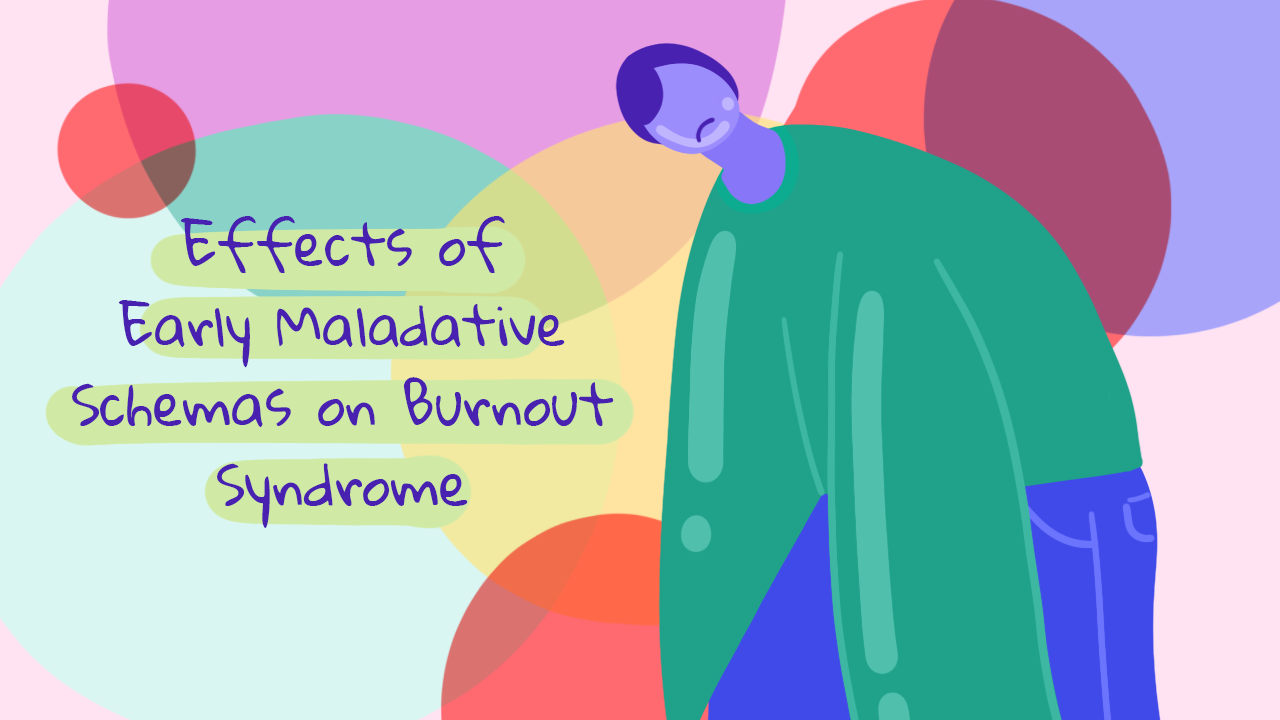 Early maladaptive schemas are persistent and repetitive patterns of emotions, thoughts, and memories that develop during childhood and adolescence. They keep affecting self-perception and relationships with the environment. This is the definition of Young, who first proposed the idea of early maladaptive schemas.

The repetitive patterns caused by early maladaptive schemas affect the individual's interpretation and perception of themselves and others. "Our schemas come with us everywhere and they can disrupt our harmony with our environment."

In this article, we discuss how our early schemas frequently manifest themselves in our working lives, potentially causing Burnout Syndrome or exacerbating the severity of an existing syndrome.

To begin, the researchers explained that workplace experiences and schemas are so closely related because of the similarities between the family environment and the work environment. Managers, according to the researchers, are similar to parents because they have authority; coworkers are similar to siblings in a family system[1]. This resemblance indicates that if there are issues with parents and siblings in the family, similar issues may arise with managers and coworkers.

The consequences of early maladaptive schemas in the workplace manifest primarily as minor stressful experiences. As the schemas become active, the amount of stress increases, which can lead to Burnout Syndrome, which we have all heard of and are now familiar with. You can find information and suggestions about burnout syndrome in our article.

In the model proposed by the researchers as a result of this study, it is stated that early maladaptive schemas are reactivated in the workplace environment due to various factors such as a manager, a colleague, or work stress. In other words, workplace dynamics can cause our existing schemas to become active and reappear!

So which schemas can become active in what ways and harm our harmony with work and life? There are numerous studies on this topic in the literature. In accordance with these studies, we have compiled a list of schemas for you:

Burnout levels increased as the activation of the insecurity and emotional deprivation schemas increased. When studies on the relationship between early maladaptive schemas and burnout were examined in the literature, it was discovered that the burnout levels of employees with strong emotional deprivation and imperfection schemas also increased significantly. It is assumed that these schemas may result in negative mental representations and distortions in individuals, and that these representations and distortions affect workplace attitudes and relationships throughout an individual's life[2].

Simultaneously, it is normal for these schemas to manifest as difficulty expressing emotions or avoiding social situations, as these can lead to problems at work. One of the most noticeable characteristics of people with insecurity and emotional deprivation schemas is a lack of secure attachment styles. Furthermore, people act as if they will be harmed, neglected, or belittled in their relationships.

Individuals with insecurity and emotional deprivation schemas may, as a result, ignore relationships, raise their personal standards in their duties and responsibilities at work, and focus on doing their best and rising higher than their peers. As previously stated, this could be due to employees with these schemas overcompensating in order to reduce the possibility of being underestimated and harmed at work. In this context, employees with an insecurity schema's compensatory behaviors can increase their level of perfectionism and thus burnout.

Because failure and pessimism schemas are usually associated with feelings of inadequacy, a strong correlation with burnout was found[3]. It emphasizes the significance of the individual's self-disclosure and self-sufficiency functions, or being self-sufficient.

A person can interpret the failure schema in a variety of ways and exhibit a variety of behaviors. For example, it can manifest as poor work or avoiding tasks that could lead to success in the workplace, or working too hard to be "over-successful." This lends credence to the notion that long work hours and a stressful work environment contribute to burnout[4].

The high standards schema is another early maladaptive schema that has been studied. Employee burnout levels have been found to increase as the high-standard schema score increases in the literature. Employees' behaviors, such as exerting greater effort than usual to meet the high standards they set for themselves and ignoring their own needs, can lead to exhaustion.

Individuals with high-standards schema set unrealistically high standards for themselves and those around them, avoid negative criticism, and are constantly dependent on the approval of external environment elements[5]. Individuals who want to realize the high standard schema put in a lot of time and effort to achieve perfection in this context.

Given that the self-sacrifice schema's behavior is to constantly give to others while not demanding anything in return, it is thought to be a tiresome situation when viewed within the context of duties and relationships in business life.

To summarize, studies show that you are more likely to develop Burnout Syndrome if you have insecurity, emotional deprivation, failure, pessimism, high standards, and self-sacrifice schemas. You can now tell yourself that these pessimistic and helpless voices in your head are the result of your schemas. Remember, understanding the schemas you have is the first step toward quieting these voices!